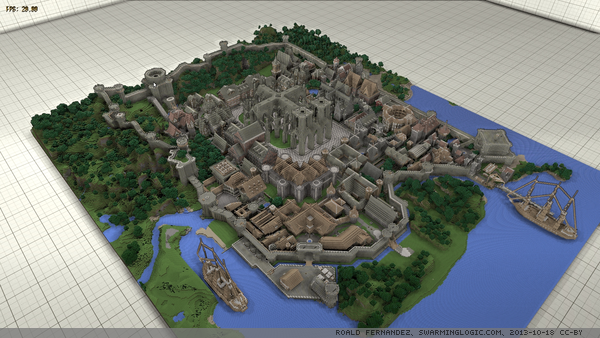 A little over a month ago, I started making my own game engine, which has until now, for the most part been a learn-OpenGL-as-I-go process.

This article is the first in a series of development logs where spend time to look back and write about the past month. The intention is to document progress, decisions made, difficulties encountered and lessons learned.

It would be great if the scribblings here were of use to someone else, but for now I'll settle for giving an answer to friends and family wondering what I'm doing all day. That, and to have something to cheer me up, if I feel I'm not making progress.

The past month was devoted to learning and , and putting together the first pieces of a game engine (so far, just a rudimentary graphics engine).

First of all, I should point out that I'm not interested in taking the shortest path to "making a game". If that were the case, I'd be crazy not to go with Unity, Unreal Engine, UDK, or any other framework that solves the millions of problems that undoubtedly will arise. I'm interested in learning the technology, and the more fundamental building blocks.

The first step is to decide which programming language to use for the base code. This decision is heavily affected by the platform one would like to target. For web games, you would nowadays go with . For android games: . For iOS games: .

As for desktop games, any of the above would be possible. However, if you would like to target all of the above*, and any other gaming platform (PSP, PS3, PS4, XBox), and your top priority is performance, there is only one choice to make: (or C, for the masochists).

* Maybe not web games, although there is emscripten for that.

Games need to interact with the graphics processing unit. Short of using a game engine framework (Unity, UDK, etc), you have to deal with the graphics card yourself. For this, there is or . Since the latter is limited to Windows and Xbox, it leaves , which isn't a bad thing.

Linux is rapidly becoming a viable gaming platform (big thanks to Valve), and absolutely every modern gaming platform will be able to use ... aside from Xbox. Not to mention that with the exception of Windows/Xbox, is the only option. The future looks very promising for .

It is possible to use various libraries to handle each separate aspect. However, if you would like be cross-platform, and target Android, iOS, Linux, Windows, Mac, there aren't that many contenders (even if you just limit yourself to desktops). is to my knowledge the best library for this. It is mainly developed by Sam Latinga, who currently works for Valve. Most importantly, Valve is now using in their linux commercial games, including the steam client. [1, presentation] [2, slides]

If you only target desktop platforms, you might want to consider for a clean and lightweight and window management solution, or for a more C++ style alternative to SDL (which very -like).

The first attempts at throwing something interesting on the screen.

Rendering live 2D text was not as straight forward as I had thought. Turns out that preparing images of the text to write, and then drawing a quad with this image as a texture is a very naive and inefficient way to go about it. makes this fairly easy to do, and one might be tempted to stick with it.

I thought it would be much worse to render a quad for each character to display, each with a screen position, and with texture coordinates for the position in a character map image. Turns out, it's not.

Just telling OpenGL is to do *anything*, is costly, much more than rendering a few hundred individual quads with individual texture lookups. This is why, instead of preparing a texture with the text to display and rendering it on a single screen (all of which takes precious CPU time), you should use a character map (an image where each character is laid out on a grid, and you know the texture coordinates of each character), and tell OpenGL how to render each character on a tiny quad, and where to place that quad.

A efficient way of doing this, I found, was to use a uniform array, with only the necessary data: the positions in the character map texture, and the position on the screen. Then, rendering each character as an instanced quad (four vertex triangle strip), in batches of 256 characters pr. render call. The optimum was found around 384 characters per batch, but it was only 1.6% better than the nice round number of 256, so I stuck with that. It's also a good idea to stay clear of . 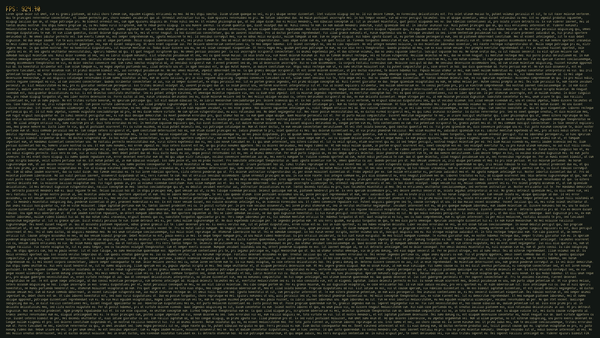 Btw, I'm using this bitmap font, which I didn't make.

Filling the screen with text, 32 124 characters to be exact, had a constant 923 FPS, or 1.083 milliseconds pr. frame. It's more or less meaningless to quantify it, other than to find good solutions for my own hardware. I'm happy with the solution, as it is both flexible (any font style variation is done by extending the character map) and fast. It supports TTF fonts by generating a character map with the desired style variations, including per-character width data, thus supporting variable width fonts.

Rendering cubes is boring. And writing out the vertices of something more complex, is also not worth it. It would be nice to be able to load 3D meshes, with texture coordinates, and normals. One of the simplest and most widely supported formats is Wavefront OBJ.

Writing a parser isn't very hard, but certainly tedious, so I used , by syoyo. With this, you can load any of the famous 3D models often seen in Siggraph videos, and research papers.

The main draw-back with the OBJ format is that it is a clear-text format. The data is written in ASCII characters, and needs to be parsed. This actually takes a significant amount of time. E.g. the Rungholt scene takes around 38 seconds to parse.

A simple workaround is to write your own binary format that handles the data you are interested in. This is surprisingly quick to do, taking only two hours to implement. It reduced the Rungholt load time from 38 to 0.7 seconds.

Here are the 70 lines of code, for both writing and reading to the format (C for Compact).

Deferred Shading is one of the methods I read about, and was awed by, thinking it would be hard to implement. Turns out yet again that it wasn't, at least the basic functionality. Then again, I haven't gotten to the hard parts yet (lighting, shadows, not to mention transparency, so these words might mock me later.

In traditional forward rendering, the geometry goes through the rendering pipeline, performing all computations necessary to determine the end result, as a pixel on the screen. If it turns out it ends up behind something already on the screen, and throws it away, along with the effort to compute its values.

The main idea with deferred shading is to store the minimum necessary data to compute the output image, as textures. Then, draw a quad filling the screen, and with access to the "data textures", compute the output image. This very neatly splits the process of preparing the data for rendering, and performing the heavy computations (i.e. deferring the heavy work to this second stage, hence the name). It also allows for some very cool screen space effects, which I will get to soon.

Currently, only position, normals and albedo texture is stored. 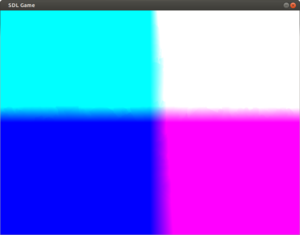 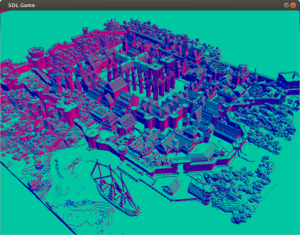 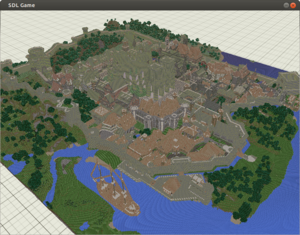 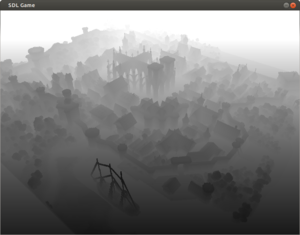 Since it might not be apparent from the position data image, that the depth buffer is contained there, I added a visualization of just the the z-component (with adjusted ranges for better visualization)

Retrieving the data is done through texture lookups.

For a diffuse shader, all that is required is normals normals and positions data. 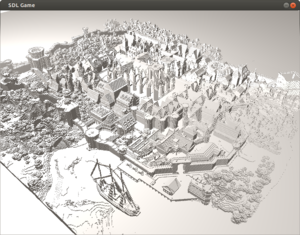 Using a Sobel operator on the depth data, a visualization of sudden depth changes can be achieved. 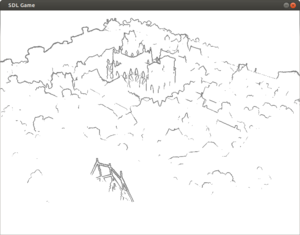 Screen space ambient occlusion (SSAO) is a clever technique to approximate the shadows that would result from geometry occluding global illumination. The implemented method is quite basic, with random sampling, but no blurring. 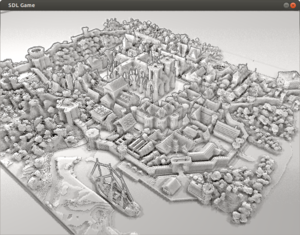 5.4. Putting it together + gamma correction

Combining the above effects: 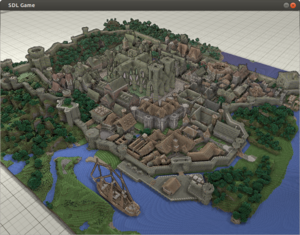 YouTube video. The framerate is a bit low, but it's mainly because of the amount of geometry.

Telling OpenGL to transition to a state that it's already in, changes nothing, but might still be an expensive call, and it's recommended to avoid it.

The easiest way to do so, is shadowing (aka mirroring) the state, and checking if a gl-call will be redundant. I do this with a singleton class, which static access functions mapped to private member functions. The point of this is to be able to say:

Instead of the usual:

is an excellent tool for detecting redundant state changes.

Below is a screenshot, showing two functions I've yet to add to my GlState shadowing: and . 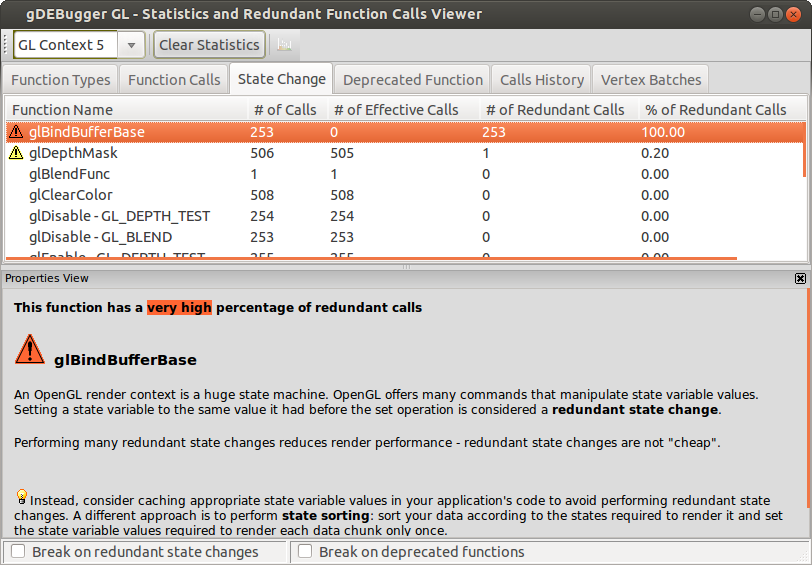 For learning OpenGL, definitely. It helps to understand the OpenGL state machine. However, as for performance concerns, there was no gain in avoiding redundant state changes, if anything a slight penalty due to the added overhead. It might be a different case once the rendering complexity becomes more realistic. Since it's easy to implement, and easy to disable once you do, I'm still happy to have it in place.

I fear this article is getting a bit out of hand, and I might end up spending far too much time on it. I'll try to just summarize the rest.

Using or becomes unmanageable, quickly. It's still very useful and important to log events. There are many ways to implement such a system. I've kept mine simple and flexible, with the following features: 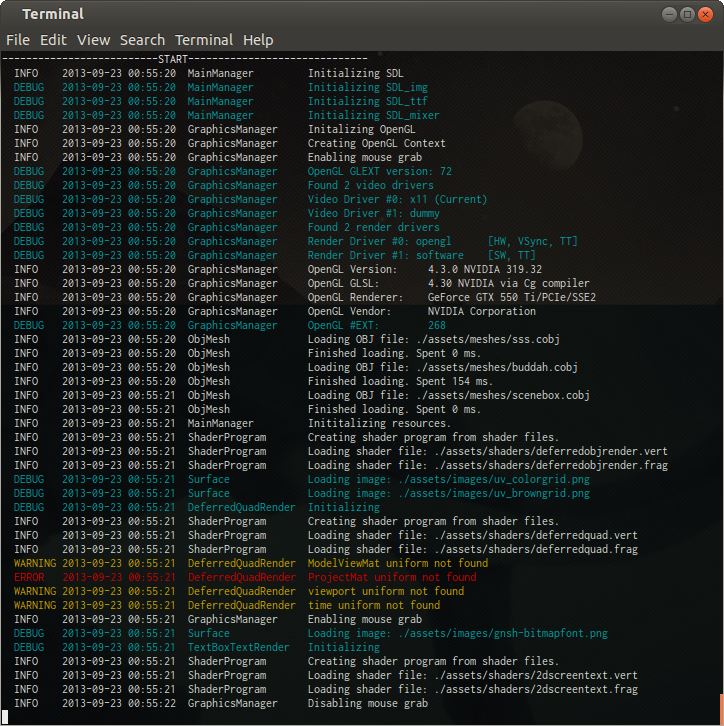 When learning GLSL, it is nice to minimize the time between changing shader code, and seeing visual change. For this, automatic monitoring of files is performed. When a file's timestamp is newer, it reloads the file, compiles and links the shaders. If it succeeds, the current shader is replaced. If it fails, it rejects the current modification and keeps the existing one, logging error output.

Here is a quick demo:

Since I'm using an nvidia card, and linux, the utility was a quick and dirty way of making sure I properly deleted allocated buffers. Use to get a live update of the memory consumption. 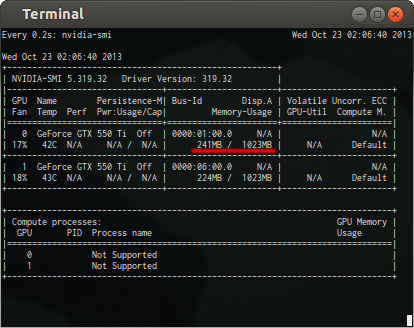 If used right, Unit testing can be an invaluable tool. It can help the class design process, catch bugs early, document functionality, and later let you be confident that a change you introduced didn't mess up something else.

My favorite unit test system (by far) is , mostly for the reasons that come to light in this overview. I customized the output to make it prettier, and also show test execution time when it exceeds : 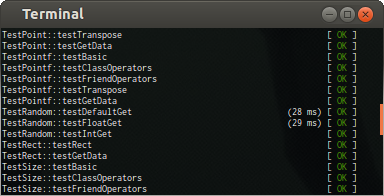 Here is an animated gif showing how simple it is to add a test suite, and individual test functions.

See my previous article on the setup for automatic code compilation. It saves a ton of time, however, it might not be viable for large code bases.

I spent too much time writing this.

If you want the source code, let me know, and I'll consider putting it on github. Currently, it's hosted on bitbucket.